Have you been thinking about upgrading your sole proprietorship business to an Sdn Bhd (private limited company)? This article will show you what tax benefits and compliance costs are involved [with a calculated example] that will make it easy for you to make your own calculated decision. 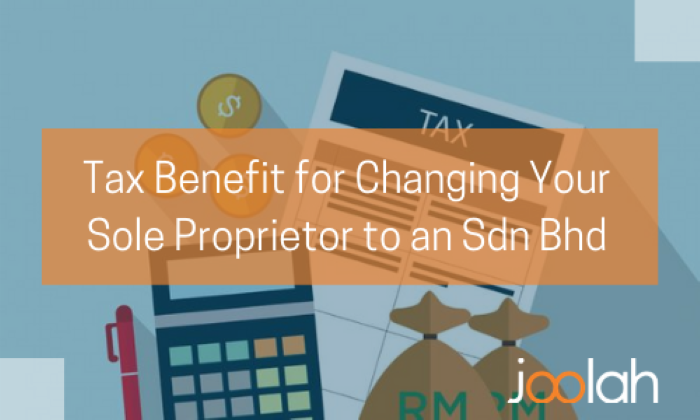 Hi, I’m Janet, the founder of PropKing.my, a popular online real estate magazine in Malaysia. I earn multiple streams of income from the website and they would include advertising-income, sponsored posts, speaking fees and referral fees. As I write, I run the website as a sole proprietor and I expect to generate about RM 250,000 in profits before tax (PBT) in 2021 and

For 2019, I had claimed the following personal reliefs:

Thus, my question is as follows:

‘Should I remain as a sole proprietor or upgrade my entity to a Sdn Bhd (private limited company)? I wish to know what the advantages are and if there is any tax benefit?’

If Janet is to upgrade her entity to a one-woman Sdn Bhd in 2020 there are some great tax benefits she can obtain.

1. If Janet Remains a Sole Proprietor

2. What if Janet Upgrades her Entity to a Sdn Bhd, What Would the Tax Benefits Be

Let’s say, if Janet incorporates Janet Media Sdn Bhd (JM), she could take advantage of tax benefits which are only made available for Sdn Bhd, not sole proprietors. I’ll explain how these tax benefits could be obtained with the following steps:

Step 1: In Order to Get the Most Tax Benefits, Janet Media Sdn Bhd’s Income Should Stay Below the 17% Tax Bracket

Here, Janet can calculate the amount of salary she could pay herself from JM to obtain the best tax benefit possible.

First, we must understand that income earned from JM would be taxed at a flat rate of 17% as its chargeable income is below RM 500,000. Hence, it would make sense for Janet to apportion some of her PBT to be received as regular salary which shall be taxed on a tier-rate basis and EPF contribution which is a tax-deductible expense for JM.

Based on the current income tax rates, it is ideal to keep her chargeable income at RM 70,000 where the maximum income tax rate is 14%. This is because from the next ringgit onwards, the income will be taxed at 20+% and this would affect the amount of tax benefit Janet could obtain.

As such, for her own personal income tax, Janet should aim to keep the amount payable at RM 4,600 for YA 2021 to maximize the tax benefits that can be obtained. To do so, she could pay herself a salary of RM 89,250 and the calculation is illustrated as follows:

Under Section 34(4)(a) of the Income Tax Act (ITA) 1967, employers are allowed to deduct their contribution to their employee’s approved scheme (EPF) up to a maximum of 19% of the employee’s remuneration.

By doing so, JM’s PBT could be adjusted as follows:

Joolah makes it easy for you to get in touch with a tax expert to help you with any tax related matters. Fill out the information below and get 3 free quotes and non binding deals.

Janet may incur the following additional expenditures to maintain JM:

The RM 7,000 in annual cost is tax-deductible and once again, would be used as tax relief from JM’s PBT.

Let’s assume that Janet switches her sole proprietorship to JM in 2020.

From above, Janet is able to claim the full amount of RM 20,000 in income tax rebate for JM. Thus, instead of paying RM 23,255, JM will pay a net RM 3,255 in corporate tax payable. This is quite a substantial tax benefit for changing her business to a company.

Step 5: Compare the Pros and Cons between the Two Entities

Finally, let’s compare the amount of cost Janet will incur if she operates under a sole proprietorship or under a one-woman Sdn Bhd:

Thus, by switching to a Sdn Bhd (1 July 2020 – 31 December 2021), Janet would be able to enjoy tax benefit of a total cost saving of RM 28,445 in 2021. With that being said, most of this amount will be credited into Janet’s EPF account and hence, would most likely be accessible when Janet reaches the age of 55.

Here’s a consolation prize. The dividends declared by EPF, which averages at 6% per year, are tax-free income and will add to Janet’s retirement portfolio in the future.

You may also want to read: 7 Things to Know about Income Tax Payments in Malaysia

If that is you, you may consider upgrading your present entity to an Sdn Bhd and thus, allowing you to claim your well-deserved tax benefits. If you don’t know, if it will be cost-effective for you to switch, and find it hard to calculate the numbers based on your own scenario – then talk to an expert.

They can quickly consult and guide you so you know exactly what tax benefits and savings you will be able to obtain from changing your business to a company. You may start by using Joolah.my, a free search tool that will quickly connect you to highly qualified accounting and tax consultants in Malaysia.